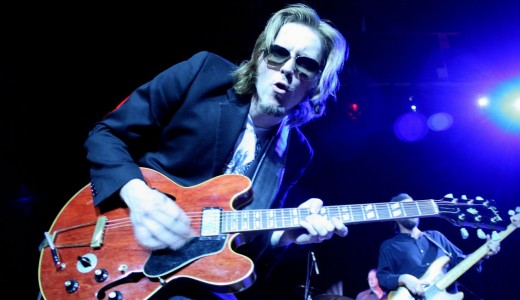 “…an extraordinarily talented Alabama guitar man that will make you feel his emotion and heart in every single note.”

Twelve years after his birth in Boaz, Alabama, Chris begged his mom for his first guitar…
It didn’t take long before Simmons realized he wanted to be a professional musician. He joined his first band at 15. At age 20, he decided one day to load up his musical gear and whatever else would fit in his van and hit the road. From there, Simmons roamed the southeast playing southern rock and blues in bars, house parties, etc. Later, he was introduced to the musical mecca of Austin, Tx. He made Austin his new home in 2001. There, Simmons started Ultrasonic, and spent five years playing legendary venues such as The Steamboat, Antone’s and the “Saxon Pub.”

He now lives just south of Huntsville, AL in the Lacey Springs community when he’s not traveling.

Leon Russell, Simmons’ former employer from 2007- 2012, has had a very strong influence.
Russell is an American musician and songwriter who was inducted into the Rock and Roll
Hall of Fame in 2011.
His interest in guitar was initially sparked by ANGUS YOUNG, guitarist of AC/DC. His longing for more knowledge of the blues led him on to, CHUCK BERRY, ERIC CLAPTON with Cream, Blind Faith, Derek and the Dominoes and DUANE ALLMAN and the Allman Brothers Band. Also on the list are DEREK TRUCKS, Aubrey Ghent, and PETER GREEN. It was these guitar legends that further led him to study the older blues pioneers like, ROBERT JOHNSON, MUDDY WATERS, FREDDIE, ALBERT AND BB KING. Johnson is at the top for acoustic blues, Waters for the real electrified blues, the 3 Kings when it comes to the blues solo guitar.
Among his favorite singers.. MUDDY WATERS, OTIS REDDING, PAUL RODGERS, FREDDIE KING, BB KING.

He has been playing the guitar now for more than a quarter of a century. He’s been traveling and performing professionally for the last 18 of those years. Over the 5 years sharing the stage with Leon, he traveled the world, making friends and fans at every stop.
“We have fun. We take the music seriously, but we don’t take ourselves too
seriously … we have fun with it, and we have fun with the audience” said Simmons.

It was an absolute honor to have been able to travel the world and to write and play music with the Legendary Leon Russell.

My musical journey with Leon was a truly wonderful time. Those last five years were a real blessing for me and my family. I’ve learned so much about music and songwriting and so much more… Knowledge that only the wisdom of more than 50 years in every part of the music business and 70 years on earth can impart.

CHRIS IS PROUD TO BE AFFILIATED WITH THESE FINE COMPANIES